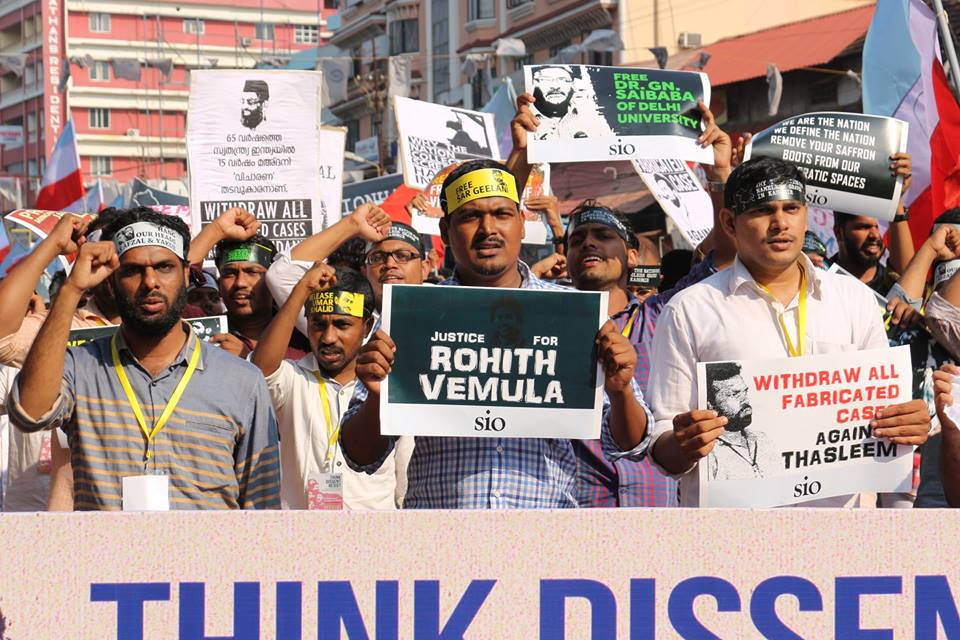 Imagine a campus where political debate is permanent. Where students receive half a dozen pamphlets to read with dinner and make up their mind on a variety of political issues. Where activist groups come in all shapes and forms, from right to left, from the centrist to the extremes – and all equally organised.

Welcome to Jawaharlal Nehru University, also known as JNU, on the outskirts of New Delhi. The 47-year-old university, one of the youngest of India’s such institutions, has already earned its reputation. Back in February, two leading figures of the Students’ Union were arrested after holding what was considered an anti-nationalist event. Kanhaiya Kumar, the SU president, and Umar Khalid, were accused of sedition, and criminal conspiracy.

In India, the events that followed are history. Thousands of students protested at JNU and around the country, asking for the release of the two young men. Additionally, over 500 leading academics, such as MIT professor and political activist Noam Chomsky, published an open letter to the Indian government taking “a stand of heartfelt solidarity with the students and faculty of Jawaharlal Nehru University” and condemning “the culture of authoritarian menace that the present government in India has generated.” The letter also urged for further student protest around the issue.

Aardra Surendran, a recent JNU graduate and now assistant professor at the Symbiosis School of Arts in Pune, went back to her old university for the protests. “It’s one of the youngest universities in India, but in terms of the intensity and quality of political action, it is in a lot of senses at the heart,” she says. “Students are the forefront in the protests that the country has seen in the past few years, because they have been at the receiving end of a lot of policies put in place by the government.”

The arrest of Kanhaiya Kumar stirred Indian youth even further, raising the deeply-rooted problem of a caste system that still stains the equality promised on paper by affirmative action in education. Kanhaiya is a dalit, a ranking so low in the caste system set by the Hindu religion, that its members cannot be touched. Historically, dalits have held the lowest positions within society, acting as latrine cleaners and disposing of the dead. They are the outcasts, the untouchables.

A month before the JNU protests, the suicide of another dalit student was stealing the headlines. At Hyderabad Central University, PhD student Rohith Vemula hanged himself with a banner of the students’ association. After a controversial row with a right-wing activist group on campus, Rohith had been suspended alongside four fellow students. Shortly after a suspension widely believed to have been caused by the student’s lower caste and the start of a subsequent hunger strike, the 26-year-old was found dead in a friend’s hostel room (he had been kicked out of his). In his suicide note, he blamed his death on “the system.”

His death sparked furious protests across India and focused the media’s attention on the plight of the untouchables, for whom discrimination is still a harsh reality despite official claims of equality for all.

Professor Shyama Dutta, a media academic at the Symbiosis School of Liberal Arts, reflects on the role the media plays in these student protests. “Once the convergence between digital media had happened through Rohith’s letter, the sheer coincidence that Kanhaiya and Rohith were both Dalits meant interesting news for the media,” she says.

She adds that in India, “The media looks for human interest stories rather than breaking news – so the news factor became huge. So what was supposed to be a student movement blew up and became a larger story, a larger piece of conversation.”

After both events, it was clear that the issues raised went beyond debates of nationalism, or the caste system. At the heart of the controversy is the role that students are expected to play within Indian democracy, and within a still traditional, top-down educational system, and how much the government will allow them to express themselves, and shape their own future.