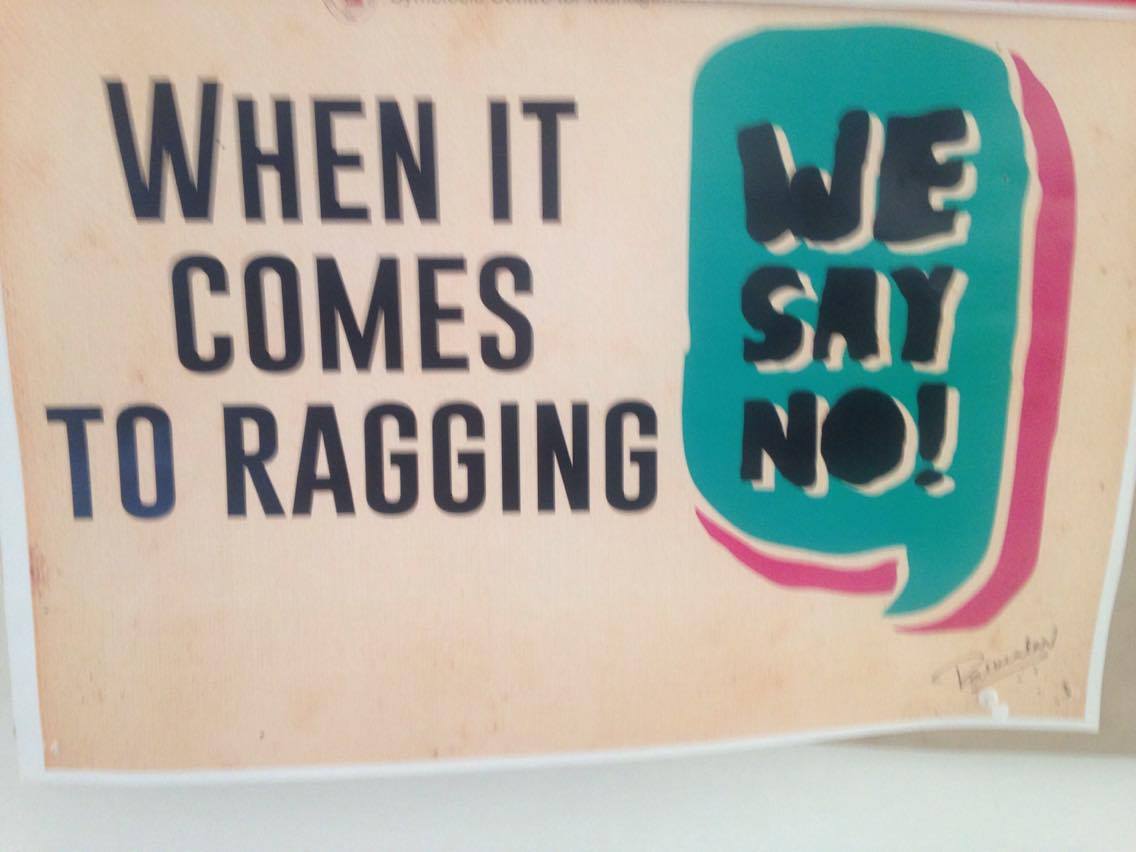 When we first descended upon SSLA last week we were met with a large amount of posters and information, in both the accommodation and the campus. This was very similar to BU and other universities in the UK in many respects. What was not similar, however, was some of the strange terminology used- specifically, ragging.

So, what exactly does it mean? After much speculation we decided to consult one of the students, who informed us that it was essentially a different term for bullying. The one thing that struck me was the sheer amount of posters and signs regarding it that featured help lines, witty slogans, and promising legal punishment for anyone involved. There was even a sign prohibiting birthday ‘bumps’, or beats, at the hostel.

A few hours later, and with my curiosity still not dwindled, I researched a little bit more about what exactly ragging is, and how it fits in with Indian educational culture. I wanted to find out the history of ragging that had lead us to such hyper awareness at SSLA. Ragging in India is defined as “as an act that violates or is perceived to violate an individual student’s dignity” (Source: Ragging in India: Wiki).

The definition of Bullying in the US is “unwanted, aggressive behavior among school aged children that involves a real or perceived power imbalance” (Source: stopbullying.gov). Just from comparing the language used, I felt that Ragging is something far more sinister than Bullying. I also discovered that instances of ragging typically occurred at more high-pressure establishments, particularly at medical schools. Meant to form hierarchal structures in the juniors, the seniors subject them to cruel and embarrassing trials such as naked runs and urinating on high voltage heaters.

Another thing that I found interesting was that in my experience in the UK, all bullying pretty much ceases to exist when students reach university level. Even friends that I know at top educational establishments haven’t experienced any sort of bullying past college.

In some serious instances, students have been left so devastated and humiliated from ragging that they have taken their own life, with six students in 2010 committing suicide because of it. In rare cases, the actual ragging itself has caused death due to physical trauma, such as Shobhonesh Naskar, who was reportedly thrown to his death by his roommates. There is, however, hope for the future. In 2015 there were only two reported deaths from ragging, and attitudes at educational establishments have changed significantly in the past 5 years. Some universities, like SSLA, have banned the practice completely with a no tolerance attitude over the past few years.

The effect is noticeable- when I walk into SSLA I don’t see any form of teasing or harassment, and the atmosphere feels positive between the students. Although I don’t have the experience of attending any other Indian university, I imagine that SSLA would be particularly positive with attitudes to ragging, due to its small student number, and the fact that it is an establishment of liberal arts.

Only time will tell if ragging will continue to decrease in the future. Perhaps for now we could all take a page from SSLA’s book, and work together to increase awareness and reduce the impact of ragging on the global youth.